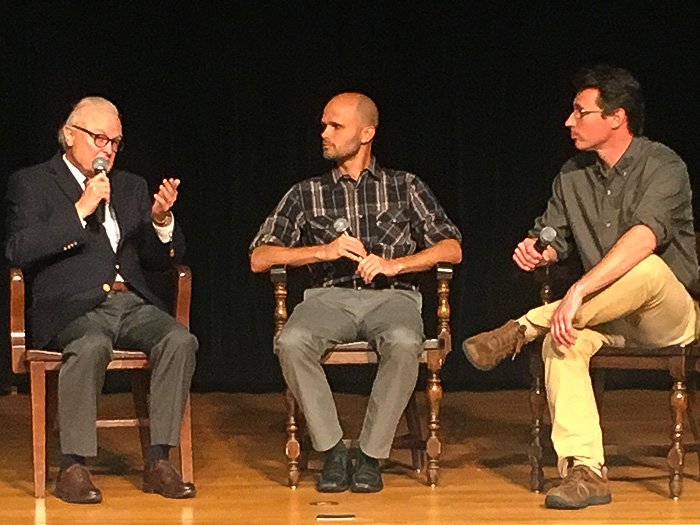 Kevin Ekvall studied making films at Southern Adventist University in Chattanooga, Tennessee. So did the three other key members of the production crew for Come Before Winter: Tanya Musgrave, Theo Brown, and Melody George.

A day before the April 22 screening of the film on campus, Kevin and producer Gary Blount met with current students in the film program and their program coordinator David George, who earned his M.F.A in video/film from the Savannah College of Art and Design. For almost two decades, George has been educating young people on the fine art of producing footage that will capture people’s attention. That several of his students collaborated on this docudrama which is capturing increasing attention across the country and overseas should make him and the university very proud.

Blount noted that the group which attended his Saturday morning program on Bonhoeffer was rather knowledgeable about the theologian and the history of the Protestant churches in Europe. “They asked very good questions and wanted to learn more, requesting recommendations for reading material.”

There was a full house of about 350 at the Saturday evening screening which was followed by a discussion with Blount and Ekvall moderated by George.

“Most films have the good and the bad, and it's really obvious which side everyone is on. What I so enjoyed was how thought-provoking this film is. You begin to realize you are not sure which is good or bad, it's not black or white. It has left me with many, many questions going through my head,” commented one viewer.