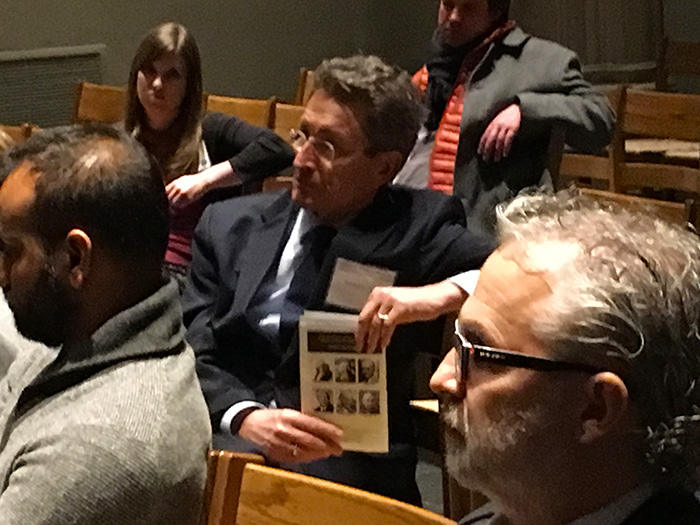 Noted church reform leader and intellectual force regarding ethics in business, politics, and science, Dr. Wolfgang Huber listens to the discussion following the screening of Come Before Winter.

Presenting Come Before Winter at the Union offered the opportunity to connect with individuals such as Dr. Wolfgang Huber, a prominent German theologian, educator, church leader, and ethicist. In addition to being former Presiding Bishop of the Protestant Church of Germany, Huber has also served on the central and executive committees of the World Council of Churches and continues as a member of Germany’s Ethics Council. His current focus is researching the mediation of ethical values in business and society. It was especially rewarding for the creators of Come Before Winter to hear Huber’s enthusiastic response to the film:

"The film lifts up the last days of Bonhoeffer's life in a very interesting way. Especially of interest is the way the film highlights the [Black] propaganda that drew attention to the Resistance Movement in Germany. It is also important for us to hear 'newer' voices tell the Bonhoeffer story—Keith (Clements), John (Matthews) and Reggie (Williams). The [German] film clips showing Roland Friesler were very disturbing, yet so important to see, as we remember the depravity of the Nazi court proceedings. There are many layers to the film [as we see] how Bonhoeffer's last few weeks intertwined with the events and people around him."