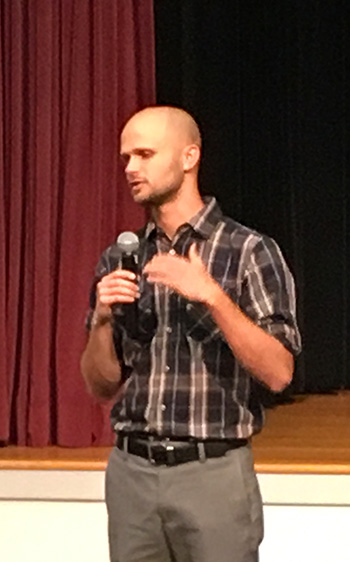 April 8, 2017... Jet lag is keeping me up so I thought I'd jot down something on my mind today. Yesterday marked 23 years since the beginning of the 1994 Rwandan genocide and tomorrow marks 72 years from the day Dietrich Bonhoeffer was hanged. Both dates, April 7 and April 9, tragic days. Both days, to me, bring to mind the subjects in my two films: Carl Wilkens [I’m Not Leaving] and Dietrich Bonhoeffer.

I've always been interested in people who risked their lives for others. People like Desmond Doss, the village of Le Chambon, the upstanders during the Rape of Nanking, and the list goes on. I've often asked, "What makes someone do that?"

Over the past several years, I've come to believe that in the cases of Carl and Dietrich the love of life played a role. Interestingly, both were in many ways on an upswing in life: Carl, married to his high school sweetheart, had three adorable kids and was working in a way he'd dreamed of since college. Dietrich, recently engaged to a smart, beautiful girl, was increasingly influential in the German churches and abroad. Both were in their thirties and both came from active, nurturing families. Certainly their lives up to that point were not easy. But in terms of prospects, they both had a LOT to look forward to.

And it's my opinion that the very joy that was present in their lives was what, in part, made them choose to risk it all. After getting to know Carl over a few years, I've become familiar with an indelible sense of joy with which he goes about life. It's contagious. I think of the first time I heard him preach a sermon back when I was in 8th or 9th grade, moved by the heartfelt delivery. I think of crazy sledding trains he instigates on Wilkens Hill or imagine him and Teresa, keyboard lodged in the dashboard of their old motor home, singing away the miles as they drive around the country from school to school. I'm sure his life has been plenty frustrating at points, too, but that joy seems to stick around. There is a vitality in his unpredictable, thoughtful way of living.

In reading, interviewing, scanning pictures, and conversing with those knowledgeable about Dietrich, I've come away believing he too lived life to the fullest. Not a life without disappointments or moments of depression, but overall, full. I think of him playing piano duets deep into the night with his good friend while in England. With the help of a black and white photo, I imagine him discussing the Sermon on the Mount, or maybe the Psalms, with his seminary students as they relax in the sand dunes by the sea. I think of him singing a soulful spiritual at Abyssinian church in New York, not far from where I'm staying tonight. I imagine him wearily but determinedly studying theology at Union Theological Seminary—perhaps even in this very room. I realize he was sometimes seen as proud. On one occasion he skipped a wedding for fear the Nazis would associate him with one of the participants, a Jew. He later regretted that decision. But over the last few years I've grown to love what I've heard about him. He had an affection for music, films, books, family, scripture, and challenges. He lived a full life with joy.

And here's what I'm trying to say: to know joy is to know what is being taken away when the killers come.

To cultivate peace and discipline. To seek reconciliation and make the most of moments. To grow friendships and let go of selfishness. To pump high on the swing set or close your eyes during Bach. Such moments are a big part of what prepares you for life's trials and decisions.

Posted in Screenings and tagged Union Theological Seminary
← Back to the Beginning at Southern Adventist UniversityRecognizing Our Post-Production Manager, Juli Miller →
Subscribe