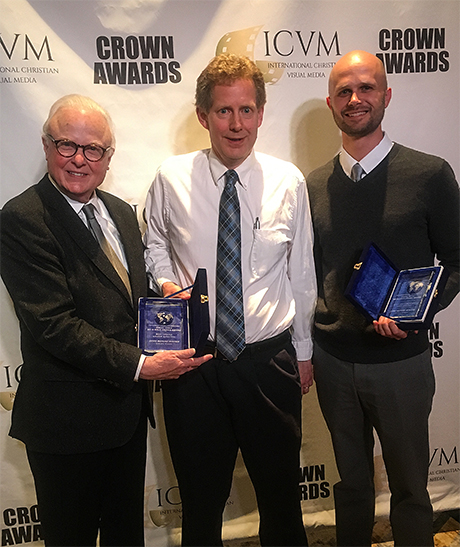 (From left to right) Gary Blount, Producer, with Bill Curtis, our Vision Video distributor, and Kevin Ekvall, Director, accepting awards at the ceremony.

Producer Gary Blount and Director Kevin Ekvall accepted two Crown Awards at the closing event of the Annual ICVM (International Christian Visual Media) Conference staged in Nashville, TN, from July 11-14, 2018. The Crown Awards recognize films or videos which reflect Christian values and demonstrate excellence in production and content and voting is done by peers who are also in the business of creating this type of film.

Produced as a docudrama, Come Before Winter (CBW) incorporates aspects of both a traditional documentary film as well as the dramatic elements of a feature film. As Gold Crown winner for “Best Drama under $250,000,” it was recognized as the dramatic film with a limited budget that does the finest job of telling a story—both in content quality and execution. In addition, CBW received the award for “Best Documentary over $50,000,” a category that judges the work on both choice of subject matter and success in conveying message via presentation of material.

Revealing of awards at the conference.
Posted in Uncategorized
← Kyle Jantzen Reviews Come Before Winter
Subscribe