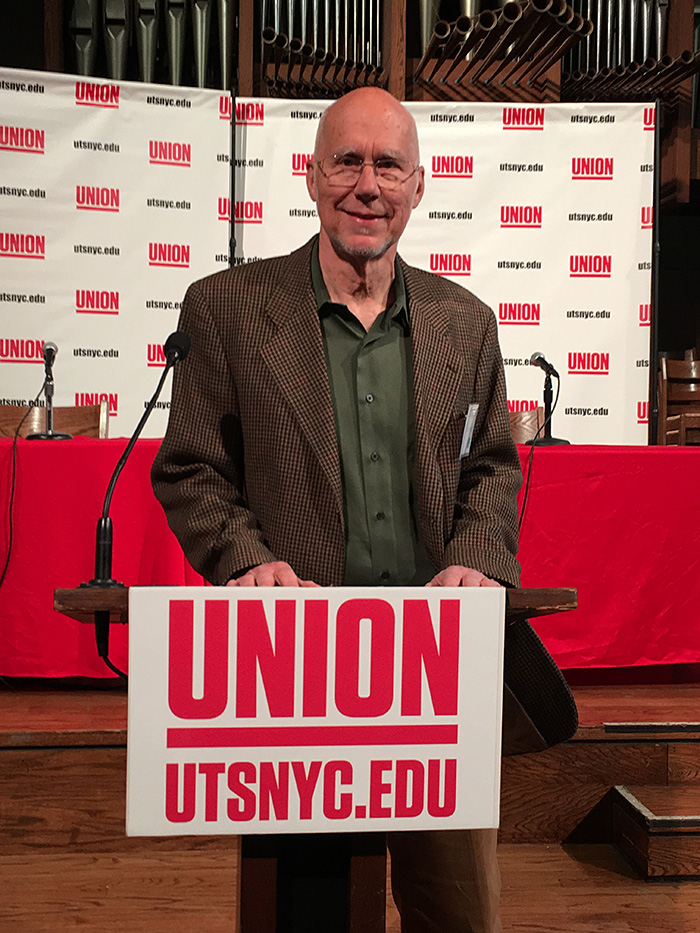 Prof. Larry Rasmussen, Niebuhr Professor Emeritus of Union Seminary and author of Earth Honoring Faith, Religious Ethics in a New Key, spoke about “Eco-Reformation—What’s Happening and Why” on the second day of the conference. He appears in Come Before Winter as an interviewee.

The second day of presentations at the Union was given the theme of “Reforming the Church of the Future: Bonhoeffer, Luther, Public Ethics.” The conference organizers sought to explore “how Bonhoeffer’s theology and ethics can contribute to creative new movements in the Christian community’s public presence.

Not only were the speakers and panelists thinking ahead, the audience represented the future—young people who were eager to learn more about Bonhoeffer. One public school history teacher from Connecticut drove two of her 8th-grade students an hour and a half each way to attend the lectures and to watch Come Before Winter. One of these girls said the film was “really cool, moved quickly, and was very interesting.” The other student wondered, “Why is Dietrich Bonhoeffer considered controversial?” They also stayed for the entire late-night Q&A session following the screening.

Indeed, one of Director Ekvall’s goals for the film was to encourage a new generation to read Bonhoeffer’s books. And so, another step in the right direction was accomplished with this event. Dr. Esther Reed, Director of the Network for Religion in Public Life at Exeter University (https://www.centres.exeter.ac.uk/nrpl/) exclaimed, “I MUST have this and I must have a copy for my school!” One of Dr. Reed’s current research projects is regarding “The Limits of Responsibility: Dietrich Bonhoeffer and Christian Ethics in a Globalizing Age.”

An older viewer of the film insisted, “We must have a copy of the film!” and hoped that the “extremely powerful” movie would be distributed worldwide because everyone needed to know this story.